The Yocan Evolve Plus XL is the big brother to the Yocan Evolve and Evolve Plus, and like many big brothers, the XL is the biggest and most powerful. Calling it powerful really doesn’t do it justice though, I mean the Evolve Plus XL is an absolute TANK. It’s quad quartz coil combined with 1400mAh battery makes for the biggest hits I’ve personally ever taken from a wax pen. I mean tears rolling down my face, clenching my chest for dear life. Hits out of this pen can be as intense as that out of a rig at times.

As you can see my Yocan Evolve Plus XL has seen some better days! However, it still works like a charm. I’ve had it for a little over a year and a half and its been through everything with me! This thing has been dropped, kicked, stepped on and most importantly it’s been used very heavily, and it’s still going strong.

Now lets take a closer look at the XL, and hop right into this Yocan Evolve Plus XL review! 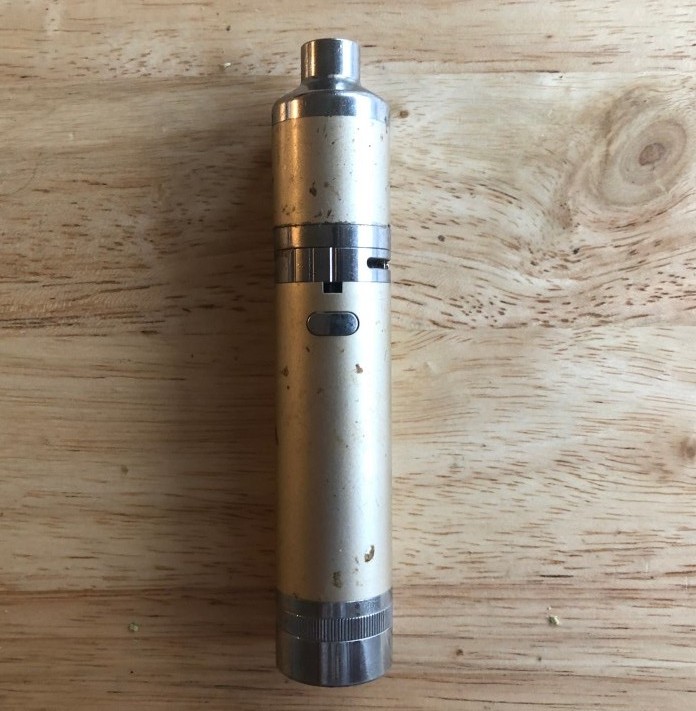 If you’re interested in purchasing the XL, you can do so at Yocan’s official website, or VapeWorld, an authorized retailer.

Taking a look at the XL compared to the Plus, the two are virtually the same functionality wise. Where you start to see differences is in the battery life, size and atomizers. Obviously the XL is bigger than the Plus, hence the “XL”, and in this bigger frame houses a bigger battery. This is one of the more noticeable differences, while the XL has a 1400mAh battery, the Plus has a 1100mAh battery. Battery life is very important on these devices as well, as once the battery starts to drain the hits get noticeably weaker, so it’s nice that the XL has some extra juice!

And then perhaps the biggest difference between the two is the atomizers. The Plus is only compatible with dual coils, while the XL can use both dual coils and quad coils. This makes for massive clouds, as there are double the coils heating your wax.

XL At A Glance 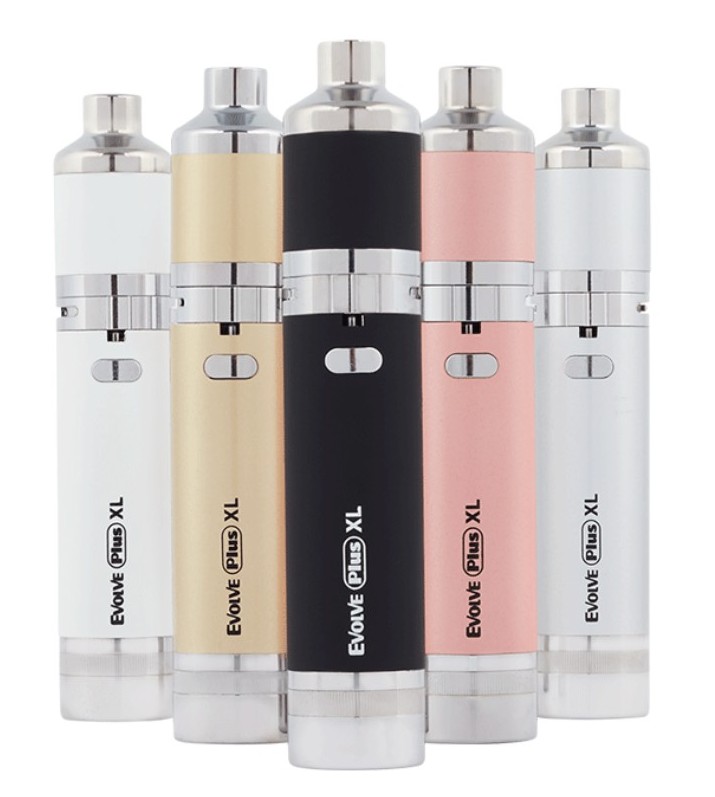 The XL isn’t like many of these new vapes coming out, you’re not going to get any fancy companion app or LED screens. What you are going to get is good old fashion durability and some really big clouds ;). Also, this vape won’t burn a whole in your wallet either($$$). Coming in at $59.99, the XL is one of the cheaper wax pens on the market.

Portability: Often times people will see that this is the “XL” and often times they’ll assume it’s big, clunky and not portable at all. However, this really isn’t the case, the XL is very portable. While it may be the biggest vape in the Evolve collection, it’s still really not that big. I’ve never had any problems putting this vape in my pocket and walking around, and it will fit comfortably in any bag as well. The only complaint I could possibly make about the portability of the XL is that it is a bit heavy, it’s made of very strong metal.

Battery Life: The battery life on the XL is nothing to complain about. At 1400mAh, this battery will last awhile, even for the heaviest of users. Typically, you can expect to get around 5-10 sessions from one battery life. The battery usually lasts me a full day of heavy use, but it’s important to remember that as the battery dies on the XL, the hits get weaker. This is undoubtedly my biggest pet peeve with the device. Sometimes I forget to charge it when it’s getting low and I try to put a glob of wax in only to get weak draws and lackluster clouds. However, this doesn’t get noticeable until the battery life gets around 40%, so if you can keep it above that you shouldn’t run into any problems. The XL can be charged using a micro-USB, and charging time usually takes around 20-30 minutes!

Build Quality: Perhaps one of my favorite things about the XL is how durable it is. Like I mentioned towards the beginning, my XL has been kicked, stepped on, thrown, dropped, you name it. And besides a few scratches and nicks, the device is completely fine. The XL is made of extremely strong metal, and not once have I been worried about breaking this thing. That’s how durable it is!

Temperature Guide: Temperature isn’t something you’ll have to worry about keeping track of with this device. If you want bigger hits, all you have to do is simply hold the button longer while you’re drawing. Try to avoid holding the button for too long however, I’ve had coils blow out from that and trust me the hits aren’t as good with only 3 coils firing!

Concentrates Storage: Another awesome feature of the XL is that it has a wax storage compartment in the bottom that is great for carrying wax in. It’s not some crappy metal storage either, as you can see, it’s perfect for wax. First of all, it’s silicone so you’ll be able to get the wax out and there are two compartments! You can store two different strains of wax or even two different types of concentrates if you’d like. Being able to walk around and keep your concentrates in the bottom of your vape is a huge convenience, and so far the XL is the only vape I know of that does it this well! 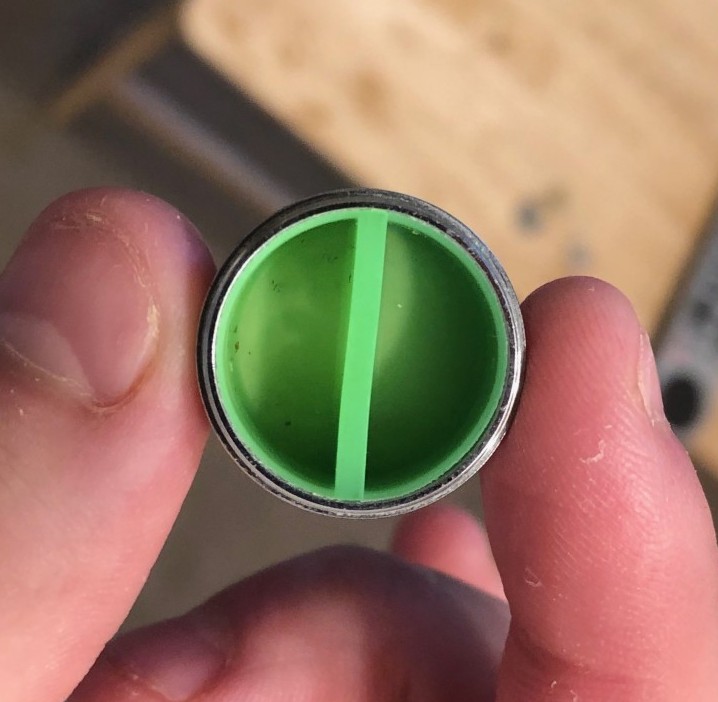 It’s important to always make sure you’re loading the XL the proper way for maximum effectiveness. You have to remember that the XL has 4 coils, and for the proper effectiveness you want your wax to hit all of the coils. So many times I’ve seen people complaining that the quad quartz coils are a waste and that they don’t work, but it’s because people are failing to load it properly.

The best way to load the XL is to get however much wax you want to load in and drop it as close to the center as you can. By doing this, the device will heat up the concentrates which will then begin to flow in all directions, eventually hitting all the coils, which is exactly what you want. Too many times people will drop their wax in carelessly and it will get stuck behind just one coil, and then be surprised when the hits aren’t as strong because only one coil is being used. If you want the biggest hits possible, you have to make sure all four coils get used!

And just another quick tip, when you load wax into this device, make sure you vape it all before turning the device off. If you turn off the device and there are still concentrates in the device, it can harden and actually ruin the coils. I’ve learned this the hard way many times!

Cleaning Guide and Other Accessories 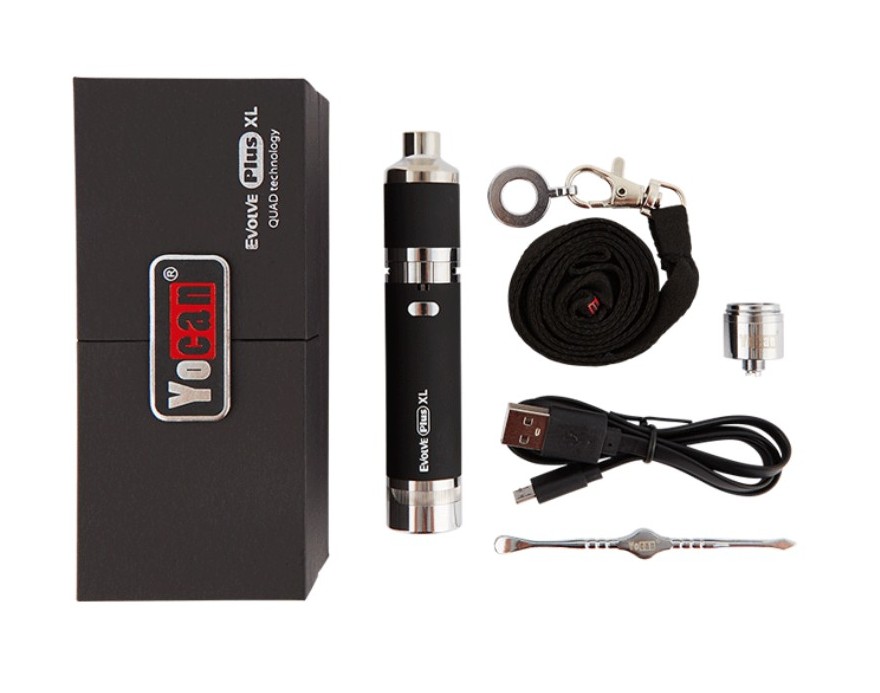 Cleaning the XL is fairly straightforward, and there really isn’t that much you’ll even have to do! You shouldn’t really be cleaning out the atomizers, as they are just going to be replaced every 6-8 weeks anyways. So the only thing you really need to worry about cleaning is the mouthpiece and the body of the device. For the mouthpiece I recommend just dropping it in some isoprophyl alcohol and letting that do all the work! The mouthpiece will get a fair amount of residue on it, so be sure to clean it as often as necessary.

One other piece you may want to clean is the atomizer cap, depending on how much residue collects on it. You can clean this cap the same way you would the mouthpiece, just toss it in some iso alcohol and let it do all the work. Usually you won’t have to worry abut the atomizer caps, as when you buy new coils they will come with them most times. However, there are some times that I’ve picked up some atomizers from a local smoke shop and for some reason they never came with caps, so just know how to clean them and try not to lose them!

As far as other accessories, the XL comes with a hanging ring and lanyard, in case you want to make sure your XL is on you at all times. You also get an extra atomizer as well as a loading tool perfect for making sure you get the proper load every time!

The XL is not only a great vaporizer for those on a budget, it is a beast of a device that is not for the faint of heart! You will get the biggest, most lung busting rips of any wax pen on the market. If you want something as close to a dab rig as possible, the XL is perfect for you. If you’re looking for a vape that offers fantastic flavors, this may not be the device for you. While the flavor is good, this device is more catered to those looking for the biggest rips possible.

Overall, this vape is portable, durable, and not wildly expensive, so if you’re in the market for a powerful wax vape, look no further. If you’re interested in purchasing the XL, feel free to do so at Yocan’s official website or VapeWorld, an authorized retailer! You can also pick up spare atomizers at both Yocan’s website and VapeWorld!

I hope you’ve all enjoyed my Yocan Evolve Plus XL review! If you have any questions, comments or concerns, please don’t hesitate to reach out to me in the comments below, or via my email!

Has anybody tried this vape before? If so, share your thoughts down below!!